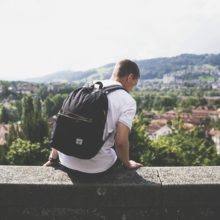 “Scared straight” programs were encouraged in the U.S. in the 1970s as a way of deterring juvenile crime. The idea was to show kids what prison looks like, and maybe they’ll decide “that’s not where I want to be.”

Taking high school exchange students to visit your local prison probably doesn’t serve much purpose. But there certainly are exchange students who need to be “scared straight.” We had such a student in our home for about two weeks over Thanksgiving. We’re not really following the “scared straight” model, not literally; hopefully, we come across “nicer” than that. But we do focus on giving the teens advice, a lot of it compacted into a short period of time.

In this case, the student was in the midst of the first part of a move – namely being asked to leave her initial host family. There are many reasons why a student might need to be moved. While not a precise figure, perhaps 15-20% of exchange students move during their year. Host parents lose a job, a host parent becomes ill, the students develops allergies to a host families’ pets. Sometimes, the “match” just doesn’t work, and the students doesn’t fit into the host family’s lifestyle. Sometimes miscommunications snowball from small things into bigger things, to the point where trying to fix it doesn’t make sense.

In the case of our Thanksgiving student, several factors contributed: miscommunications, poor language skills, a student’s “slowness” to adapt to local and family lifestyles, and student expectations that were not reasonable. The student’s expectation that it was the host family’s job to make the exchange year a success contributed to the problem. The host family tried to encourage the student, and the student tried to adapt. But she came from a city, and had difficulty adapting to a small town of 6,000 and a high school of 700 students.

Eventually, the host family reached their limit, and asked their local coordinator to come get the student. Because the local coordinators were already hosting a student from the same country, they could not legally have the student living in their home. So she came to us, shortly before Thanksgiving.

We’re the ones who can, hopefully, help keep you from being sent home early.

What happened in the two weeks we shared our home with this teenage miscreant? Well, we think we scared her straight. She’s now in a new family, and seems to be doing very well. Fingers crossed.

In addition to the many students we’ve hosted for a full year, we have had many students come through our home for one week, two weeks, a month, or two months, while we or others look for a new host family. We teach these kids how to adapt, how to adjust, how to be a good ambassador of the exchange program and their country. We explain what they can do to change their behavior, and we are direct and honest in what they should not do in interacting with their host family. We help them see what they did wrong, if that is why they lost their host family. We show compassion. We repeat, again and again, the things they should do to be an exemplary exchange student – to be an “ambassador” of their country.

How does this translate into practical terms? It means we’re constantly talking; indeed, we have a reputation for talking all the time. We talk about everything and anything, ranging from small talk to big issues. It means we talk about table manners. We insist on “please” and “thank you.” It means, if a student is on his smartphone while we’re all watching TV, gently saying “please turn it off.” If the student says he is texting with his mom or a friend, we smile and repeat that there are times to talk to friends and mom – and there are times to focus on your host family. It means that we explain that if you go out, you ask first. You tell us where you are going, and you text to say when you will be back, because we’re “training” you for what to expect from an American host family. It means we expect you to help set the table, fill the dishwasher, and to do your own laundry (and to first ask how to do that).

It means we expect our students – and while they are with us, they are “our” students – to be at their best. The hope is, that the practice will become the reality in a new host family

In this case, we started out facing negativity. “I don’t like being in such a small town,” and “The people at my school are not friendly,” and “I don’t know why my host family asked me to move, I didn’t do anything wrong.” “No one likes me,” and “it’s a boring place.”

Two weeks later, our “miscreant” is in a new family. By the time we moved her, she was asking questions like: “when can I move? I want to get back to school!” and “have they finished the paperwork yet? How long will it take?” She was smiling a lot, and made jokes.

Success happens. But it takes effort. That’s what we do — or try to do, at least. The hoped-for happiness of the new placement is balanced by the sadness of the first host family. Due to no fault of their own, they lost a student, with whom they had hoped to have a long-term relationship. Moreover, we don’t enjoy being the “bad guy.” But hopefully we’ve saved the exchange year for the student, and avoided an early trip home. If so, we’ve done our job.

Tips For New Host Families: Make it a Mix of Rules … and Fun!