The White House issued an Executive Order this past Monday (June 22nd) suspending entry into the U.S. through the end of 2020 for anyone participating in a number of international short-term work-related exchange programs. While the EO does not directly affect high school exchange students, it is worth a quick review to understand what it does cover.

Summary For Our Readers

The EO pauses the issuance of H-1B visas (professional workers); H-2B visas (non-agricultural workers); certain J-1 non-immigrant visas; L-1 visas (intracompany transferees); and H-4 visas for dependent family members. The H-1B visa normally allows businesses to hire professionals from other countries in specific fields. Colleges, too, rely on H-1B visa professionals, as it enables them to hire faculty and postdoctoral scholars from around the world to round out institutional expertise. The H-2B visas are for lower skilled non-agricultural workers “for a limited period of time such as a one-time occurrence, seasonal need, peakload need or intermittent need.” The J-1 visas that are included in the suspension will affect people who want to participate in internship, trainee, teacher, camp counselor, au pair, and summer work travel programs.

The result will mean that many individuals who had hoped to participate in some international work-related programs will not be able to do so this year.

The rule will not apply to people already in the US on existing visas or foreign nationals who do already have visas. The administration also stopped short of curtailing the Optional Practical Training (OPT) program, a work program for recent international graduates that allows them to remain in the U.S. to work in their field for at least one and in some cases up to three years.

Students such as high school exchange students and college students are not included. So, high school students should still be able to participate in their exchange programs this Fall, assuming local schools accept students in light of the pandemic, US embassies re-open so that students can get their visas, and travel restrictions are lifted in time for students to start school. (Admittedly these assumptions are big ones and beyond the scope of this short blog post for discussion today.)

The stated intent of the Executive Order is to protect American workers in light of the extremely high levels of unemployment caused by Covid-19:

Many organizations involved in international cultural exchange have publicly stated their concerns. The executive director of the Alliance for International Exchange, for example, expressed the Alliance’s opposition to the inclusion of the J-1 Exchange Visitor programs in the EO:

“[t]hese international exchange programs help American families, while enabling American host businesses to remain open year-round … They do not displace American workers, and, in fact, contribute more than $1.2 billion to the US economy.”

J1 Visa Exchanges (“J1X”), a U.S. Department of State-designated sponsor of J-1 trainee and intern programs, referred to the cultural exchange component of these programs, noting that “an overwhelming majority of J-1 #culturalexchange participants say the program has helped them gain a better understanding of the U.S.” 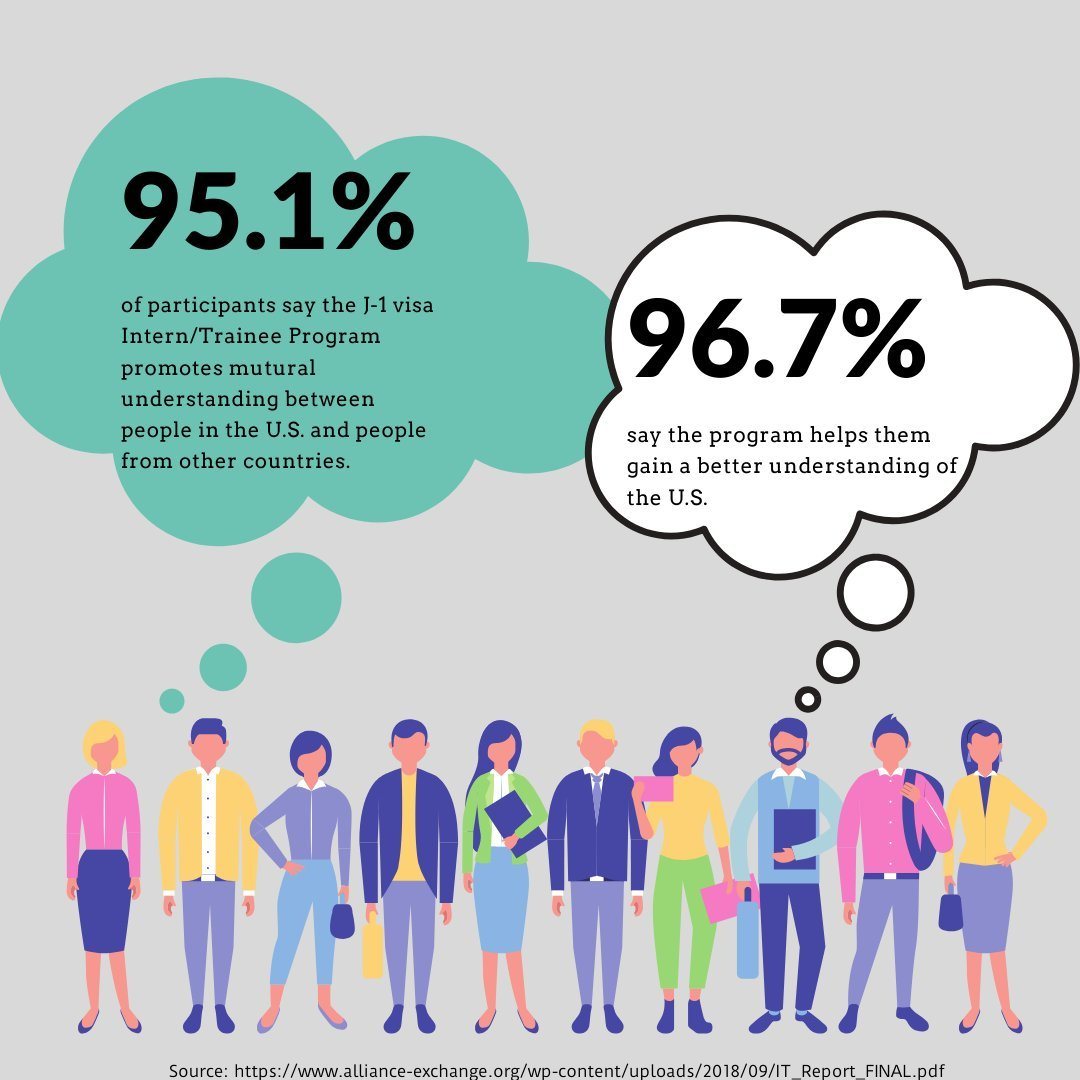 There is also considerable dispute about whether the EO will have the jobs impact described by the Administration, and many business leaders have voiced opposition to the limitations of the EO, saying it will “block their ability to recruit critically needed workers from countries overseas.” One CEO’s statement can serve as an example:

“Putting up a ‘not welcome’ sign for engineers, executives, IT experts, doctors, nurses and other workers won’t help our country, it will hold us back,” said Thomas J. Donohue, the chief executive of the U.S. Chamber of Commerce. “Restrictive changes to our nation’s immigration system will push investment and economic activity abroad, slow growth and reduce job creation.”

Colleges and universities are concerned that the EO sends conflicting messages to international students about whether they are welcome in the U.S. while expressing relief that the OPT program can continue (at least for the time being…). The OPT program is a key attraction for international students, since it gives them an opportunity to extend their stay in order to gain real-life experience in their chosen field. As one article this week noted:

“Surveys of international students have found that the opportunity to gain work experience is very important in their decision to study in the United States. More than 223,000 students participated in OPT in the 2018 academic year, or one out of five student-visa holders.”

International students generally pay full tuition to colleges, so the loss of revenue with decreased enrollment could have significant economic impacts on higher education at a time when those institutions are already facing economic challenges due to impacts of and changes mandated by the pandemic.

It won’t surprise readers to know that we agree with these assessments. Cultural exchange is the primary goal of these programs. These are not true job programs. They’re intended to show teachers, young professionals, college students, and more different aspects of U.S. culture and society. Moreover, the economic impact of curtailing these programs goes beyond the short-term potential of switching foreign workers for U.S. workers (which itself may not be a valid assumption). We agree with Richard Haass, the president of the Council on Foreign Relations, who stated:

“This is as self-defeating as it gets. @realDonaldTrump has opted for short-term anti-immigrationism over pro-US competitiveness. China and others will be the big winners here while American businesses, workers, and consumers will be big losers.”

We hope these restrictions will not last long.