My wife, Jenn, and I spent this past Saturday at the marriage of my former exchange student, Nha, from Vietnam. Nha spent the 2003-04 school year with my family through EF High School Exchange Year. She returned to the U.S. to go to college and recently started working at Oregon Health Sciences University (OHSU).

It was a lovely ceremony, held mostly in Vietnamese. It was followed by a wonderful reception, with all sorts of tasty and interesting dishes from Nha’s homeland. 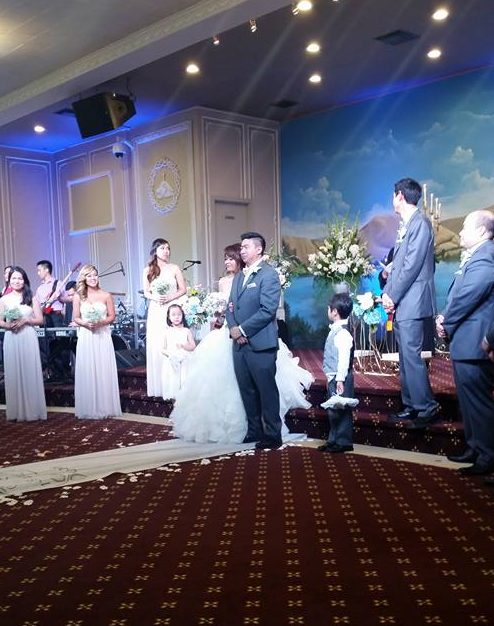 The only phrase I remember in Vietnamese from my year with Nha was “cam an,” which means “thank you.” Some of the food was familiar, but some—being celebration food—was new, such as the chicken dish and two whole roasted pigs. The ceremony itself had some differences from what I’m used to, including a sort of karaoke performed by the wedding party.

After we left, Jenn pointed out that our experience in a crowd full of happy, talkative, outgoing strangers, separated by a language barrier, was probably a good deal like the experience of a new exchange student. There was no shortage of good will and desire to communicate, but it was very hard to understand everything that was going on in overwhelmingly unfamiliar surroundings.

We realized that this is what it must feel like to students who have just arrived in their host country.

I found—the way a person who has one sense dulled notices other senses strengthening—that I was paying closer attention than usual to body language to figure out what people were doing. Smiles and gestures got us through most everything; things like table assignments at the reception required more careful and detailed translation.

New students go through this same process as their English skills develop. Misinterpretations are part of the learning process.

The wedding ceremony was held under the auspices of a relatively familiar religious affiliation, so its rhythms and progress were relatively easy to follow. However, the language barrier wiped away any distinctions between what might have been a cultural practice and what was there simply because the two young people at the altar wanted it that way.

That confusion is what we see with our exchange students. What’s culturally American and what is peculiar to our households becomes indistinguishable, and can cause students to make assumptions that they later find to be invalid.

The ingredients in the wedding food were largely familiar, but prepared and seasoned in unfamiliar ways. The overall flavor and texture palette were at turns delightful and off-putting. Hunger, and a desire to be gracious, overcame some of our nervousness…but some differences are just too much to overcome. Chicken feet are past my limits.

A student sitting down to her first few American meals must experience the same thing. Processed cheese slices may be beyond our students’ ability to deal with unfamiliar tastes.

By the end of the evening, watching Nha dance with her new husband (I stayed dry-eyed up until I saw her starting to cry during that dance, I swear!), and seeing the joy in the little interactions between friends and family, it was clear that no matter how different they were from us, it was far easier to see the humanity that unites us all than to focus on the cultural and individual differences between us.

Our students have the same experience, as they grow to know the warmth of our hearts and our homes.

Nha’s wedding offered a powerful lesson in understanding the struggles—and the rewards—our students face, particularly in the early days of their time with us. It was a reminder to Jenn and me to be patient and compassionate in helping them through the period of culture shock and of the shared joy that awaits on the far side.

Lars D. H. Hedbor is an amateur historian, home brewer, astronomer, fiddler, linguist, and baker. His fascination with the central question of how the populace of the American Colonies made the transition from being subjects of the Crown to citizens of the Republic drives him to tell the stories of those people, whether in television appearances, classroom presentations, or in the pages of his Tales From a Revolution novels. Hedbor lives in Beaverton, Oregon, with his wife, Jennifer Mendenhall, and five daughters. Lars and Jennifer are exchange student coordinators for EF High School Exchange Year.